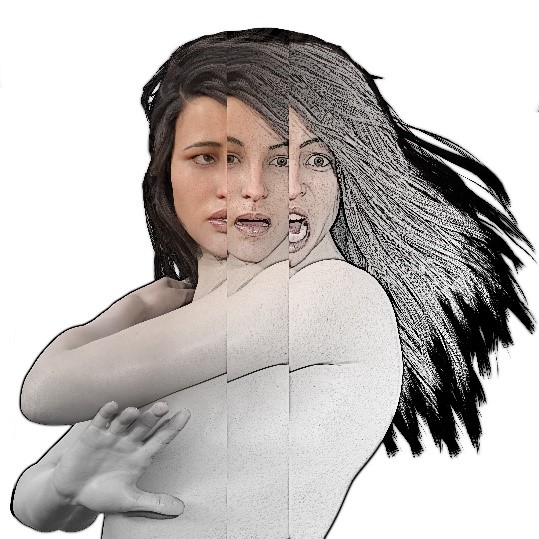 They say the mirror doesn’t lie.

I’m here to tell you that it does.

Unless you don’t want to know. In which case, you should turn back now…

Most people think of mirrors as a reflection of what is, but they are not.

For starters, if they were accurate, the term “mirror image” would be meaningless. But we all know that it means “opposite.”

It doesn’t just mean “reflection,” or we would use that term instead, wouldn’t we? “Reflection image.” Doesn’t that feel so much more innocent? So much less… sinister?

That’s because, although reflections are distorted, they aren’t lying to you. You can tell they’re not perfect. You can see the ripples, the bends, the twists, and you know them for what they are.

There’s a reason why “fun-house mirrors” show up in the horror movies and why other movies have characters stare at themselves in the twisted images coming out of the fun-house mirrors while dramatic music plays and time slows.

Those mirrors, which are made of the things whose reflections we trust, are lying and we know it. And it bothers us. It bothers us deeply to know we are being lied to by the things we think tell us the truth about ourselves.

But how many times have you primped and dressed in front of your trusty mirror only to have someone tell you that you look fine when you’re sure you got it all wrong? How many times were you sure you finally nailed it and looked cooler than the Fonz and Pinky Tuscadero rolled into one only to have someone laugh at you, because you looked like…the Fonz and Pinky Tuscadero rolled into one?

The mirror lies. It lies because there is more than it shows, and it shows less than there is.

The truth is always more.

And the mirror can never show all of it.

Now that I’ve shown you the easy ones, the ones you can live with, let’s fall into the abyss together.

Because even if the mirror could show all of it, you couldn’t see all of it.

As the years go by, and you look at the photographs, they don’t change. They don’t lie. They stay exactly the same. Sure, they may fade a little bit. The colors may tarnish. But then, so does your memory, and that’s okay.

How is that possible?

Because you’ve believed the mirror’s lie.

Every day you’ve stood in front of the mirror and believed what it told you. That that—that mirror image looking back at you—is you.

And you believed it.

And now, you can’t believe the unchanging photograph. The thing that is telling the truth. Because the mirror slowly changed your perception of yourself so much that you can’t recognize who and what you once were.

And, after you realize that, how can you possibly trust it to tell you who you are now?

You’ll go on trusting it, because, if you think about that too long, you have to reject it. Or go mad.

At this point, I was ready to go into the sales pitch: Go Buy My Story Here! (I’ll come back to that in a minute…) But I got totally derailed by stopping and reading Elise Stephens’ post. You see, Elise and I are exchanging posts to “cross promote,” and she is a lot more on top of things than I am. As with many projects, I don’t read what other people wrote until I get a good part of what I am doing done. I’m willing to redo something if an idea is too similar, but I hate giving up an idea before I had a chance to explore it, so I just don’t read other authors’ things until I’m done, or nearly so.

And I was surprised to see how similar of a theme Elise and I had: The mirrors lie.

Why did we both lean that way? Well, the obvious and easy answer is we are both trying to promote our stories in an anthology about mirrors. But the more terrifying answer, and unfortunately just as true, is that we both know the mirrors actually do lie.

So, from me to you, as someone who cares, don’t listen to the mirrors.

Instead, consider entertaining yourself with a copy of Gilded Glass: Twisted Myths and Shattered Fairy Tales, where you can read my cautionary tale, a modern myth if you will, about someone who thinks they know best and trusts what the mirror says. Then you can read Elise’s story. (It’s good!) And then you can read the other stories. Some of them are okay, too. (Gosh! I’m kidding! There are so many great authors and stories it’s hard to believe!)

And, like Elise, as part of this guest post, I’ll be giving away an eBook of mine! Blazing Uncanny Trails, my first collection of Weird Western short stories, chock full of monsters and cowboys! Leave a comment below to enter the drawing, and then go check out Elise’s post on my website, SamKnight.com.

Sam Knight is the owner/publisher of Knight Writing Press and author of six children’s books, five short story collections, three novels (with the fourth scheduled to release in December 2022), and over 75 stories, including three co-authored with Kevin J. Anderson.

Once upon a time, he was known to quote books the way some people quote movies, but now he claims having a family has made him forgetful, as a survival adaptation. He can be found at SamKnight.com and contacted at sam@samknight.com.