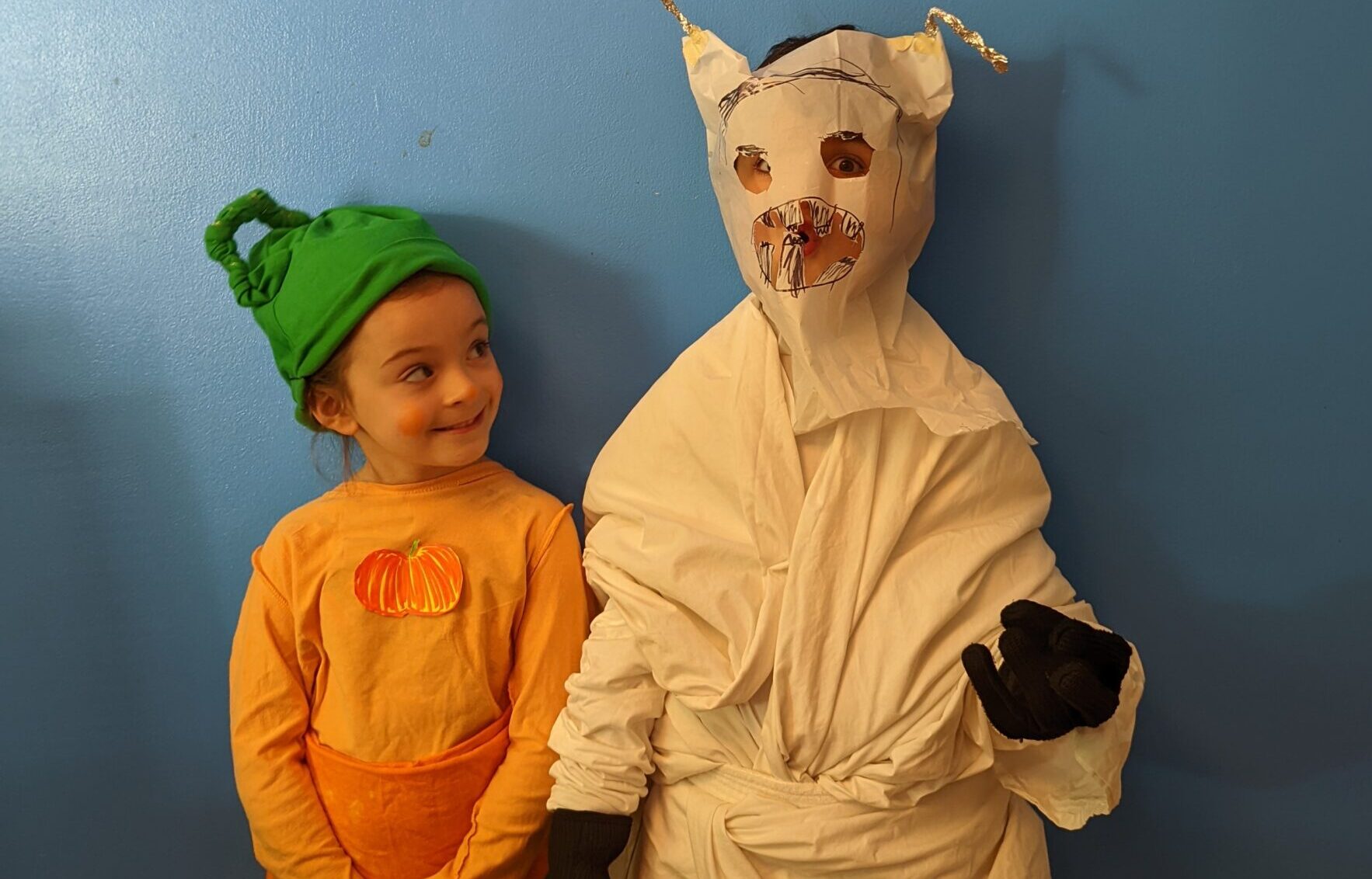 It’s been a while since I’ve checked in, and I want to explain part of that.

The beginning of school was a *really* rough start for me and the kids this year. It’s my fourth year of homeschooling, so I’d like to think that I have at least some of it figured out by now.

My daughter entered kindergarten this year, which meant I was teaching two students instead of one, but kindergarten isn’t a huge challenge to teach–especially for my bright little pumpkin (yes, she was a pumpkin for Halloween) who already reads simple sentences and shows a bright eagerness for pretty much all forms of learning.

The difficulty lay with my eldest, who’s entered third grade. His curriculum this year took a major jump in workload, especially the reading portion of it. I realized immediately that we weren’t going to be able to keep up without everyone’s brains frying out and at least Mama having regular emotional breakdowns. I started cutting back, but it still wasn’t enough.

Thoroughly exhausted when we finally finished at 3:30pm, I’d then collapse for a short nap, only to drag myself up afterward and start figuring out how to tidy the house, which was a disaster, and then onward to making dinner.

One of the really bad signs: I had zero desire to go out and do anything fun in the evening. Not even hang out with friends for a drink and conversation, which is usually a huge joy for me. I was just. Too. Tired.

I knew something was wrong, but I couldn’t find the solution. The signs of depression were all surfacing, but I hadn’t changed any of my vitamins, antidepressant meds, or anything like that. And yet I knew I couldn’t make it through the school year like this–unless I was going to title it The School Year From Hell–and…yeah…that didn’t sound doable.

So I sat on the couch one night, babbling my anxious thoughts and feelings to my dear husband and, even after I’d finished, I still didn’t have any dramatic insight. He said, “Is there anyone you can talk to?” And after thinking for a while, I remembered that my curriculum has a helpline with homeschool advisers who’ve been in the trenches like I have, and who are happy to help me brainstorm and troubleshoot.

I spoke the next morning to a wonderful, kind woman who’d homeschooled her two boys. She assured me that my son’s struggles and wandering attention were very normal for a nine-year-old and then told me that the curriculum we were using was recommended for 4th-7th grade. Even though it was the next step in the natural progression of the coursework we’d been doing at home, it was going to be a huge jump up from his previous year’s workload.

She suggested that we slow down our pace and allow ourselves 2 years to finish the work instead of one–and assured me that because it was so advanced for his grade level, we would not fall behind if we did this. I would maintain his regular schedule for his math, spelling, and handwriting, but I’d slow things down elsewhere.

You guys, I almost burst into tears when I got off the phone. It was basically life-changing.

It’s so hard to know what to do, to know that something is wrong but not understand how to fix it. I didn’t know the curriculum was advanced for his level. I just thought we were going so slowly and I didn’t see any other solution except to try harder.

I’m a completionist. The number of things I’ve quit could likely be counted on my ten fingers without using all the fingers. I don’t want to fail my kids in their education. I take it extremely seriously. So I asked for help.

And, thank God, there was a solution out there and a kind person to give me permission to take it.

Slowly and surely, I’m feeling more like myself again. The depression and bone-weary exhaustion have abated.

It took me six weeks of worrying and struggling and doubting and trying to white-knuckle my way into the new school year, but I can finally say I think we’ve hit our stride.

Sure, we still have days where the fractions don’t make any sense, when a spelling test is cause for a weeping tantrum, and when piano practice is so anger-inducing that someone is slamming the keys in dissonant, nerve-jangling cords, but I can say I’m enjoying it once more. And I feel like I have the capacity for joy and friendship again. I can’t thrive without those.

Cheers to you and yours who are in the throes of the school year. I’m there in the trenches with you!