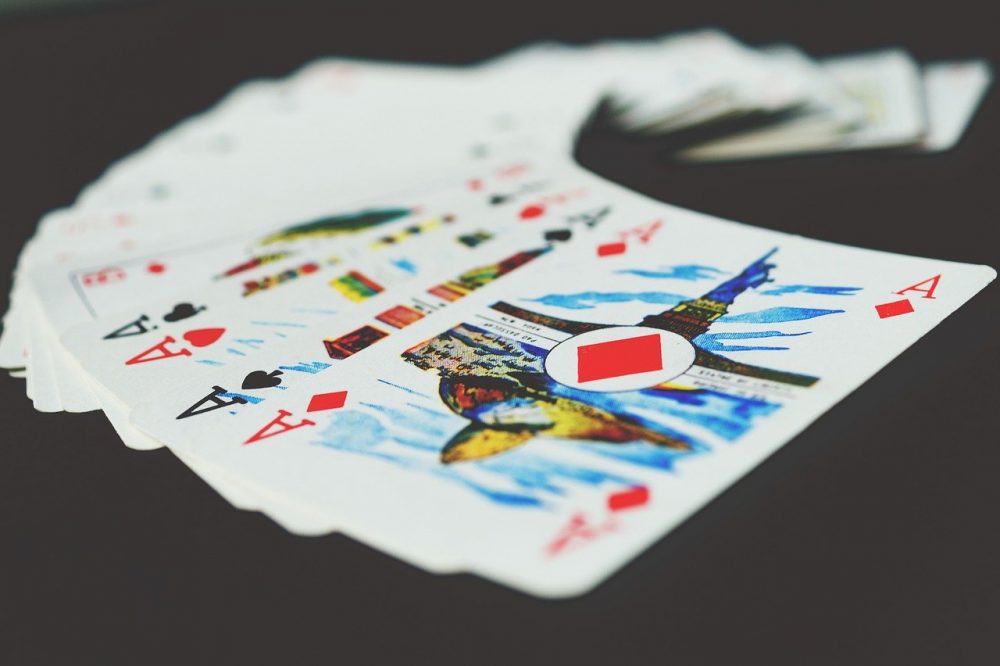 I love magic tricks. Card tricks, sleight of hand, people disappearing into boxes and slipping out of chains. I don’t understand any of them, but I love them.

Even though the astonishment I experience makes me feel a bit stupid and crazy, I usually I end up laughing because I’m so perplexed by what the illusionist just did right in front of my eyes.

Last year, at World Fantasy Con, I lingered by a booth where a man was doing card tricks to pass the time while people browsed the rare and collector’s books he had on display.

My friend, Tim, was there and we were all talking and then I started paying more attention to the card tricks. I laughed harder and harder as they progrsesed because I had no flipping idea how he was doing them. It was like he was reading my mind. I even tried thinking of a different card than the one he had shown me, in case he really *was* reading my mind.

Nothing worked. I remained 100% befuddled. I laughed harder.

Let’s just say, I am probably a very amusing audience member because I get so flustered. It probably makes the magicians feel smart and capable.

We all kept on talking, and the magician mentioned that he and his wife had been married in The Magic Castle (a place I had never heard about). Apparently, it’s an exclusive magician’s club and you can only go there if you are invited or brought by a member.

Later on he said to me, in a voice that sounded like I’d passed some sort of test, “You know what, you’re a friend of Tim’s? You live in this area?” And when I admitted that no, I was from Seattle, he said “Oh, never mind then.” But I knew he was going to invite me to come to a show at The Magic Castle! Arrgh!

I wished in that moment that I lived in LA. But, alas, the opportunity was not meant to be.

So what’s the purpose of telling you this? First, it’s a fun memory. It had little or nothing to do with networking and hobnobbing with people at a conference. It was mostly just having fun and chatting and getting to know people. And it almost got me an invite that would have knocked my socks off.

I don’t think networking is supposed to be terribly awkward and anxiety-inducing. Tim told me to just hang out at the bar and skip all the official conference panels and sessions if need be because they’re not the point of cons. Of course, the good-girl Hermione Granger in me would have done just the opposite without such advice. Where are the easy-to-follow rules for getting to know people? And why do we use an awkward word like “networking” to describe that?

I saw a Twitter post recently that said roughly, “Befriend people because you like them, not because of what they can do for you.” Simple but profound advice.

For introverts, networking can feel nauseating and coat you with a blanket sweat just thinking about it. I get it. Me too. But sometimes meeting people just starts with a kind person who is happy to introduce you to a few of their friends and it spreads outward from there, like warm tea making you feel safer after you drink half the cup.

Of course, all of this assumes we are actually gathering in person and not isolated under COVID-19 restrictions, but (planning for our future selves) for those of you wanting to branch out and feeling shy, maybe start by watching someone do something interesting and then strike up a conversation about it (like watching card tricks). Or begin with a single, friendly face and start asking them about themselves, what they do, what they dream of doing one day, and let the conversation slowly flow.

It gets easier with practice. And if you are lucky enough to find someone who loves introducing people, stick with them! They are so precious! I want to be that person someday. It’s an “adulting” skill I want to develop; literally, Get better at introducing people to each other.

As far as I can tell, there’s no magic trick to networking. It’s about being kind and happy to truly get to know someone. And for success in networking to really took hold, there’s a good, unpredictable dash of other people being kind to you and helping you along the way. But I can tell you from personal experience, you might be delightfully surprised how many of them are out there.